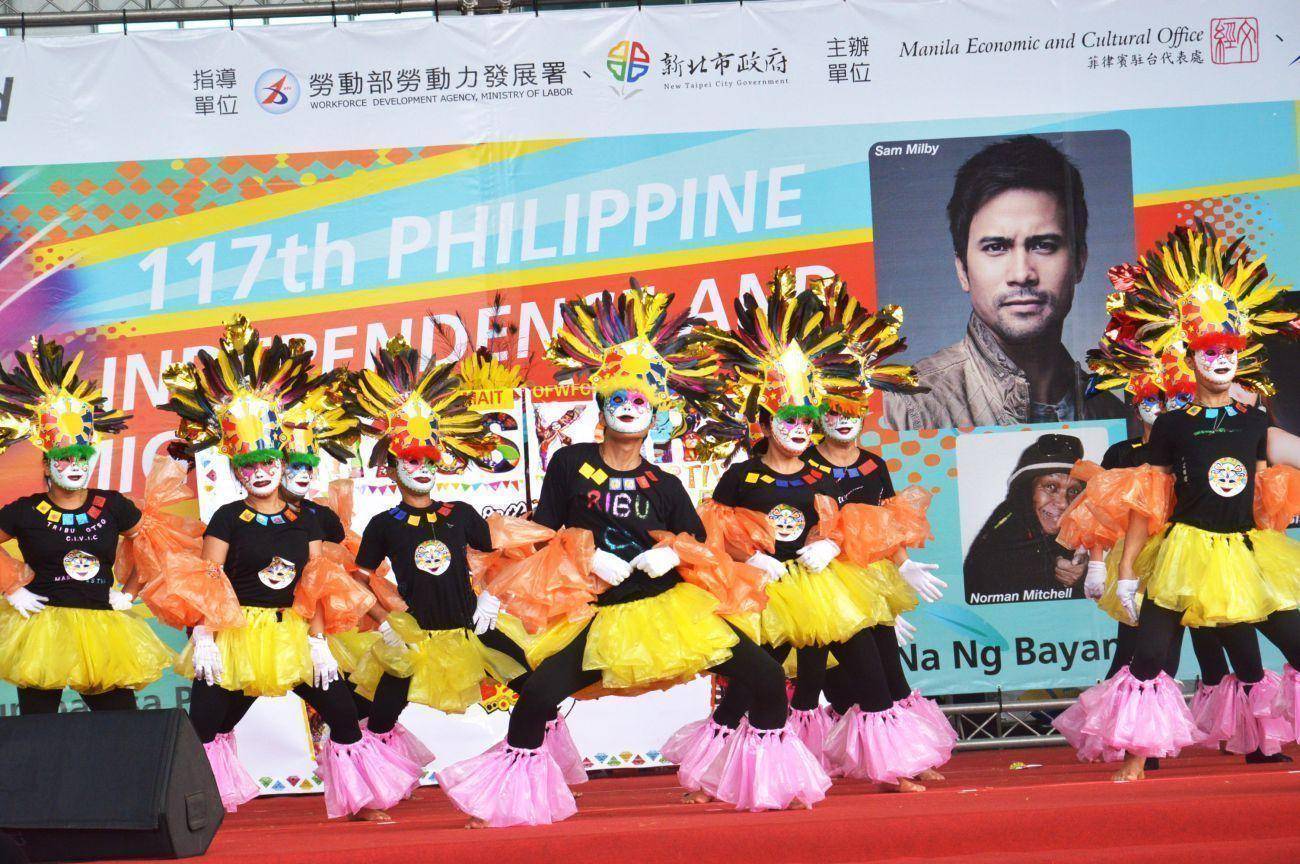 Filipino migrant workers on the 14th put bright colorful carnival costumes, the public square in front of the new Taipei to celebrate the 117 anniversary of Philippine

The 117th anniversary of Philippine Independence Day was held at Panchiao’s People’s Square, New Taipei City last June 14, 2014 has drawn around thousands of workers. Filipino Community and new immigrants organized the Masskara Festival that attracts hundreds Filipino participants. Masskara Festival was a local festivity in Bacolod City, from Oct. 1-20 that gives the people of Negros, as well as local and foreign visitors a chance to drink, dine and street dancing and be merry for 20 days. The term Masskara is created from two words: mass, meaning crowd and the Spanish word cara, for face. Bacolod 'Mask Carnival "originated the Philippines, in 1980, a ship loaded ferry sank Bacolod residents, about 700 people were killed, local caught in sadness, who decided to planning the local arts Carnival Mask "with a smile" is away sad, masks Carnival has become one of the Philippine cultural activities.

The New Taipei City Mayor Chu and Labor Minister Guo Fangyu deliver an inspiring to the Filipino migrants workers. The Mayor Chu speech, welcomed the new Taipei Philippine migrant workers become part of the family, and embrace the Philippines as part of Taiwanese culture; Labor Minister 郭芳煜 also mentioned that the Ministry of Labor is responsible in protecting the labor rights and will strengthen the cooperation to the Philippine to ensure the labor rights of Filipino migrant workers. Zhu and Guo full speech in English receives a big applause and enthusiastic response from the crowd.

On the other hand Ambassador Basilio express his gratitude in his speech that the when the Typhoon Haiyan strike the central Philippine two years ago leaving a large devastated area. Mayor Chu launched immediately to raise money to help rebuild the live of the affected people and he is very thankful for supporting every Philippines activity.

Aside from the colorful and joyous presentation of Masskara costumes and dance of different Filipino Community, the activities also highlighted the presence of famous Philippine artist Sam Milby, Filipina singer Krisreandrea "Birdy" Cambonero and comedian Norman Mitchell come to the concert.

In addition to performances, the public square as well as the Office Joint Health Bureau, the Immigration Department, offers haircuts and beauty meaning scissors free massages, there are many fast-food industry to provide fast food service, which of course, is the traditional Filipino food stall, Amy's Ktchen provides traditional Filipino food capturing the well missed Filipino food that attracts the homesickness in our countty, whether it is Sinigang (seafood soup) and popular Pancit bihon.